“It’s two years since Marco, Tony and me started this project. Because we like movies and the songs that were composed for them. We’ve just finished, can you believe it?! Marco has made the arrangements. With care and respect, not worth any change, you cannot touch a melody composed by such a master as Henry Mancini! However, a song for a film is so evocative that every one of them is a movie in itself. That’s why you can’t stop inventing stories about them, that’s why there is always something else to say. And that’s why we wanted to tell them in our way. Although this project is planned for a quartet, we have played it very often as a trio. Because we like it, it also makes sense.”

CINEMA It all started when we shared our common love for the movies. One gets even more involved with the story when there is a song specially composed for it. We get hooked on the melody and we want to tell it our own way but without stealing its soul. That’s what we’ve done for this job, enjoy the song that a film gives to us, talk about it and imagine its future colored by  jazz. 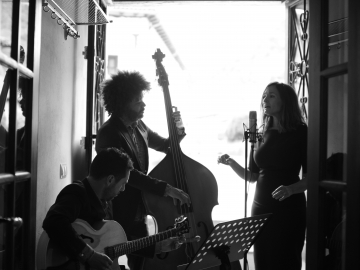 Anthony Da Cruz · bass
Born in Brazil, he began studying traditional music, cavaquinho and percussion at age 10 and moving on later to electric bass. He collaborates in the best clubs in Sao Paulo with artists such as Marquinhos, Delcio Luis, Peninha, Rick Rener … and TV programs as Elsa Soares, Noite illustrated, Musical Broadway Show Chicago, etc. In parallel he begins his jazz training with great innovators as Airto Moreira and Hermeto Pascoal, playing with prestigious musicians like Gilberto Gil, Jaques Morelembau, Nika Rejto, Pedro Araujo, etc. Since his arrival in Spain he currently works on several projects in Madrid, Galicia and Barcelona, highlighting its regular participation in the Asturian jazz scene.

Mónica Matabuena · voice
Vocal coach in MixVoice Studio-Madrid, she is a Certified Instructor (Level 1) from the Institute for Vocal Advancement. As jazz singer she starts her studies in 2010 with Irene Shams, Florencia Begué and Arturo Lledó and is a regular student of vocal improvisation with Bob Stoloff since 2014. She has played in different jazz formations and has recorded songs in several short films in collaboration with BSO composer Fernando Velázquez, including the short film “Dime que Yo» (Goya 2010). Currently working on CINEMA with Marco Martínez and Antony Da Cruz as well as a vocal jazz project Mr PC with Irene Shams, Florence Begué and Pahola Gutierrez.

Mikel Urretagoiena · drums
He has a bachelor degree in drums from Musikene, Higher Music Centre of the Basque Country, where he is taught by Jo Krause, Guillermo McGill, Bob Sands, Joaquín Chacón and Mariano Díaz. He finished his Master Degree in Prins Claus Groningen Conservatorium (The Netherlands) in 2016. He moves to Manhattan where he receives classes from Ari Hoenig, Kendrick Scott, Jonathan Kreisberg, Nate Smith, Nasheet Waits, Mark Guiliana and Ziv Ravitz. Now he is involved in several projects: The Machetazo, Dani Pozo 4tet and Makram A. Hosn Koan-tet, with whom he has played and recorded in Spain, The Netherlands and New York. 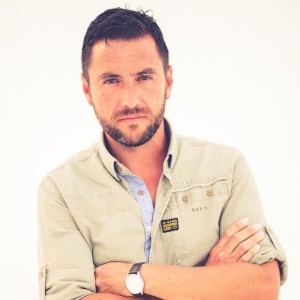 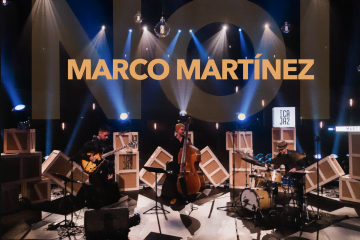